At the peak of the COVID-19 pandemic air traffic levels quickly dropped to around 70% globally. Now we are starting to observe a movement towards traffic recovery.  Commercial flying is starting to resume with health and safety measures strictly embedded into the airport and airline operations.

In our previous Fast-Time Simulation (FTS) blog, ATM consultant Irene Bravo, talked about how terminal processes can be impacted by the current globally enforced COVID-19 measures – a discussion where the main focus is on passenger security screening.  As we move further through the stages of the airport process, we can also identify potential terminal-configuration related constraints that can have a direct impact on airfield operations.

Figure 1: The Aiport Process Broken Down In Stages

Airports worldwide have different terminal layouts, but they all have one thing in common when considering the aircraft boarding phase – passenger queueing is always required.  In a majority of cases airlines include more than one queue dedicated to different passenger boarding types (e.g. priority boarding vs non-priority boarding).  Boarding gates are often able to accommodate all or most passengers of a flight, however, in the majority of cases they have not been designed in a way to accommodate passengers queueing or sitting 2 meters from one another.  So how can airports ensure that passengers maintain the required social distancing for flights as load factors recover?  Increased boarding gate space will be needed either through terminal re-configuration or through the use of multiple adjacent gates to serve a single flight.  So how may the internal terminal reconfiguration impact airfield capacity and operations?

Considering that passenger bussing is not desirable, as it could increase passenger boarding duration and alongside airline turn-around times, such integrating of boarding gates could in some layouts prevent the use of adjacent boarding bridges and, therefore, adjacent pier aircraft stands.

To better understand the potential impact of combining boarding gates on the airfield operation, we developed a case study of a typical single-terminal UK international airport.

For a representative schedule, the airport operates approximately 420 aircraft movements daily with peaks in the morning and noon hours. Roughly 90% of the aircraft are Medium Wake Turbulence Category (WTC) and the rest are Heavy WTC.  For standard operation, turn-around times are considered to be 35 minutes for Medium WTC and 120 minutes for Heavy WTC.  For increased turn-around times, we considered Medium WTC aircraft to require 50 minutes and Heavy WTC aircraft to require 150 minutes.

For the analysis of gates re-configuration, we considered 3 post-pandemic traffic recovery scenarios*:

*In each recovery scenario it is assumed that 10% of the recovered traffic is operated by Heavy WTC aircraft.

Aircraft do not use adjacent pier stands to ensure sufficient space for the imposed social distancing measures within the gate areas, however, adjacent remote stands can be used.  Furthermore, each scenario has been tested both according to the standard and increased turn-around times to further acknowledge the impact imposed over airfield capacity.

WHAT DO WE FIND OUT FROM THE FTS MODELS?

In the initial traffic recovery scenario, we observed that 40% recovered traffic can be accommodated without any implications when considering both standard and increased turn-around times.  This indicates that the available stands capacity is sufficient and there is no demand for additional stands to be re-open.

In the mid traffic recovery scenario we observed that 60% recovered traffic cannot be accommodated by the available stand capacity.  When standard turn-around times are considered, approximately 1.6% (4 aircraft movements) of the traffic is unable to use pier stands, therefore in order for the traffic to be accommodated fully the use of 3 remote stands have been required.  In comparison, increased turn-around times have more than double the impact as stand capacity is insufficient to handle roughly 3.6% (9 aircraft movements) of the traffic and 5 remote stands have been used for aircraft parking.

In the late traffic recovery scenario we observe that 80% recovered traffic, similarly as the previous scenario, cannot be accommodated by the available stands capacity.  Results show that when standard turn-around times are considered 6.6% (22 aircraft movements) of the traffic cannot be handled by the pier stands and 14 remote stands have been used.  When turn-around times are increased that number rises to 12% (40 aircraft movements) and the number of used remote stands jumps to 16. 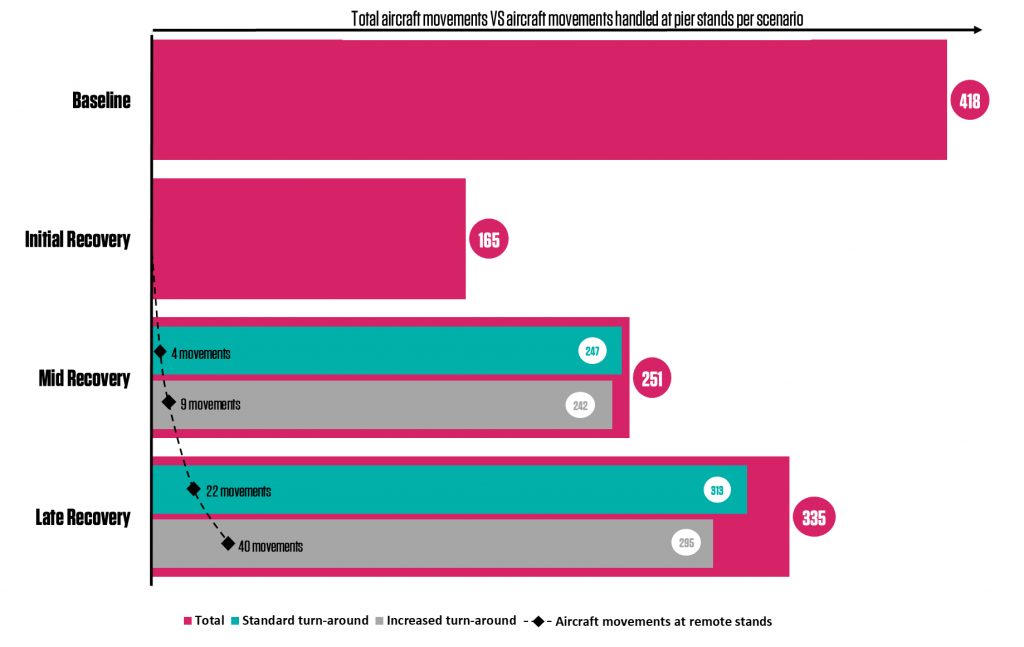 Firstly, it is important to note that available terminal space for passengers boarding differs amongst airports and could pose a challenge to those with limited capacity for increased queue distancing as required.  Re-configuring terminal space to minimise passengers grouping is one way of ensuring social distancing is maintained between both passengers and staff.  However, such a solution may not be efficient for airfields that have predominantly remote stands in use as it could result in further logistical challenges such as increased demand for passengers’ buses and staff.

At the initial stages of traffic recovery, limiting the airfield capacity as a result of re-configured boarding gates space is not a problem as in most cases there is sufficient available capacity to handle the traffic even when potentially longer turn-around times are experienced.  Despite the fact that flights are expected to have lower load factors as a result of forced national travel restrictions and measures by airlines that guarantee the health and safety of passengers, airports need to be proactive and be prepared for the safe handling of varying passenger levels.  Such an approach should be consistent and cohesive throughout the whole airport process to ensure the recovery pace is not impacted.

As traffic continues to recover along with passenger demand, restricted airfield capacity arising from terminal constraints starts to become an issue.  Relaxation of measures should be considered at this stage which will result in requirements for new terminal space re-configuration, re-opening of gates and reverting to standard turn-around times.  Alternatively, remote stands could be used to accommodate the traffic levels, however, airports need to consider the logistical implications mentioned above to ensure passengers and staff health and safety are not compromised through high levels of bussing.

At the later stage of the traffic recovery, re-opening of gates and increased use of remote stands becomes essential to ensure the traffic is accommodated safely.  Generally, bigger airports have wider boarding space available to handle large amounts of passengers compared to small and regional airports, which makes it easier to use adjacent gates and not disregard health guidance.  To overcome this problem, smaller airports may consider flexible re-configuration solutions which could be adapted depending on passenger numbers and increase use of automated technology to minimise passenger-staff interaction.

As we have previously stated, passenger and airfield simulation is an extremely useful way of understanding how particular measures could have an impact on an individual airport process or the overall picture.  Using simulation allows the capturing of operational requirements and easy identification of potential constraints imposed by changes in the processes. If after reading this article there are any aspects of the airfield operations that you would be interested in us assessing in the future then please do get in touch! 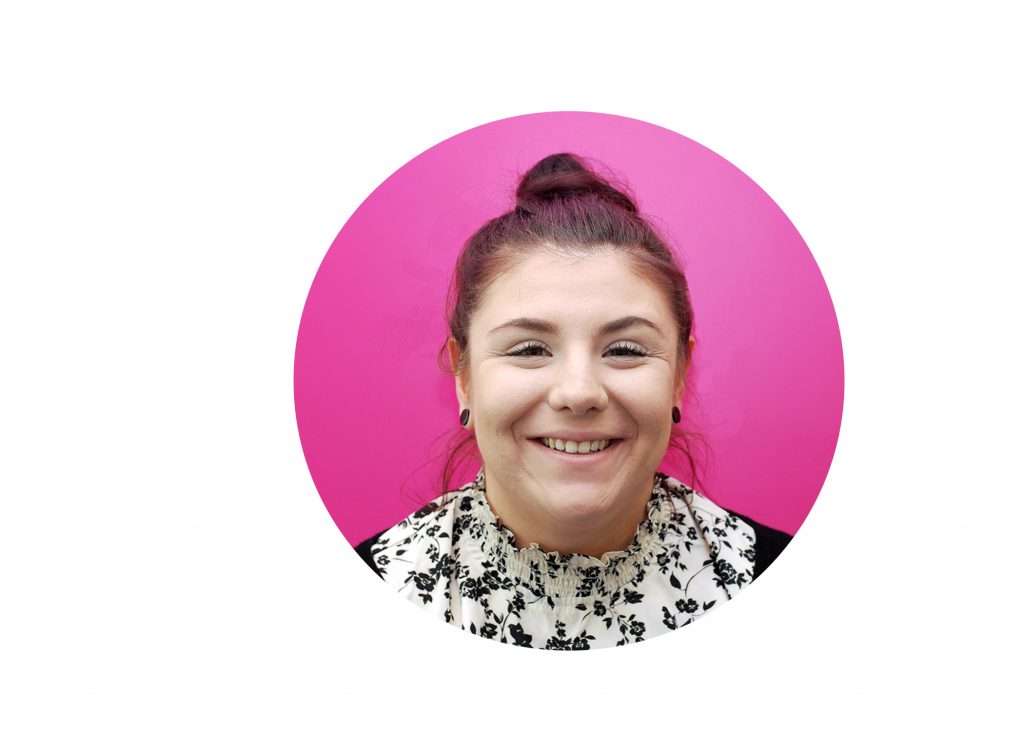