After the initial chaos resulting from rapidly declining traffic levels had passed, airports and their supply chains slowly started to consider what the implications may be of COVID-19 protection measures on airport processes. A plethora of ideas have been put forward by Government, industry and airports themselves ranging from ideas to facilitate social distancing, contactless check-in and bag drop through to the truly bizarre such as rapid full-body disinfectant booths.

But which solutions should an airport adopt and what are the implications? A few weeks ago we analysed how an airport could cope with new security process regulations with minimal impact on passenger experience. The same approach to analysis can be applied to any proposed COVID-19 measures. We therefore chose to investigate some of the airport operational measures proposed by the Airports Council International (ACI) in their ‘best practices for airports during COVID-19’ guidance material to find out how they could impact airports. The ACI have recommended a range of measures that airports can apply including:

In addition, there has been a concern recently expressed regarding the ability of airports to implement full social distancing measures. The usual requirement to “guard 2 metres from others” is presently a major element of our daily routine throughout many countries. But how practical is it to expect airports to apply social distancing within the terminal where there is limited space? Many European airports have been designed around the principal of passengers moving from one queue to the next throughout their journey with any remaining space dedicated to retail activities. But if we have to social distance how much more queuing space are they going to need and can it practically be provided?

To understand the potential impacts of both social distancing and the ACI measures, we developed a case study of a typical UK regional airport security area based upon a particular example, consisting of two lanes: one for priority and one for standard passengers.

For a representative schedule, approximately 600 passengers are processed through the security area of this airport during the peak hour in a recent busy summer day. Passenger waiting times in this situation are relatively low at around 2 minutes for the entire process.

For the analysis of the ACI measures implementation, we defined 3 post-pandemic traffic recovery scenarios:

Social distancing was implemented wherever queues could be expected and each point of the security area was half its maximum capacity hence only divest positions and alternate lines were opened. This last measure helps to maintain social distancing more easily than if all lines were opened. In addition, airports would be saving on operational costs. However, it should only be applied if the volume of passenger permits; it is preferable to have adjacent lines opened than more likeliness of queues generation. Prior to accessing the area, non-contact temperature testing processes were added as well as checkpoint staff instead of e-gates to avoid passengers touching any device repetitively.

The recovery scenarios were subject to simulation with a focus on security process throughput, queue times and necessary queuing areas.

What the models show?

The initial recovery scenario was shown to be easily capable of accommodating the passenger demand with relatively low waiting times; less than 3 minutes compared to the approximately 2 minutes that passengers spent on baseline model queues. The peak hour throughput was not impacted either: 237 passengers per hour. In addition, we needed extra space to fit in queues longer than 20 metres at peak hour due to social distancing. The rest of the time, queues; if any; are formed by a maximum of 3 passengers.

The mid-recovery scenario demonstrated little improvement in hourly throughput despite higher demand leading to substantial delays of 50 minutes waiting times. We conducted several sensitivity analyses to find the constraint and concluded that the application of the ACI recommendation to limit the use of hand search to the strict minimum was causing the bottleneck. 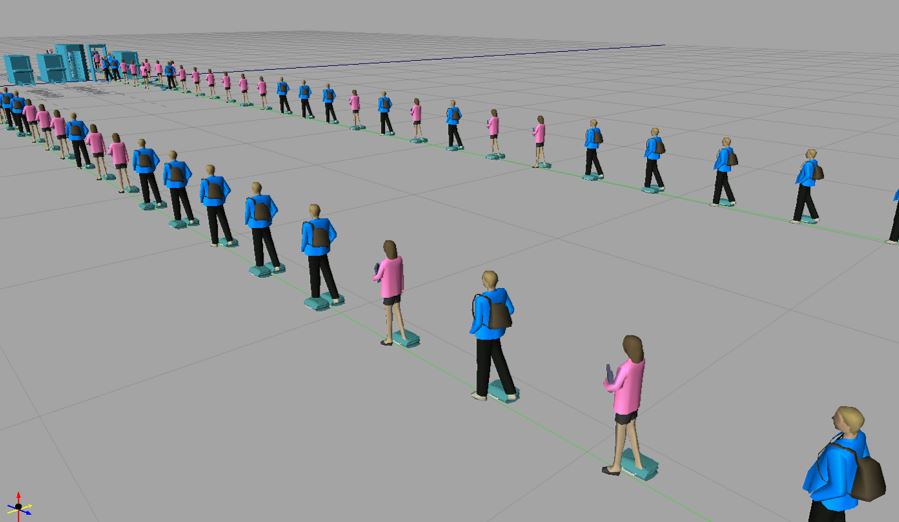 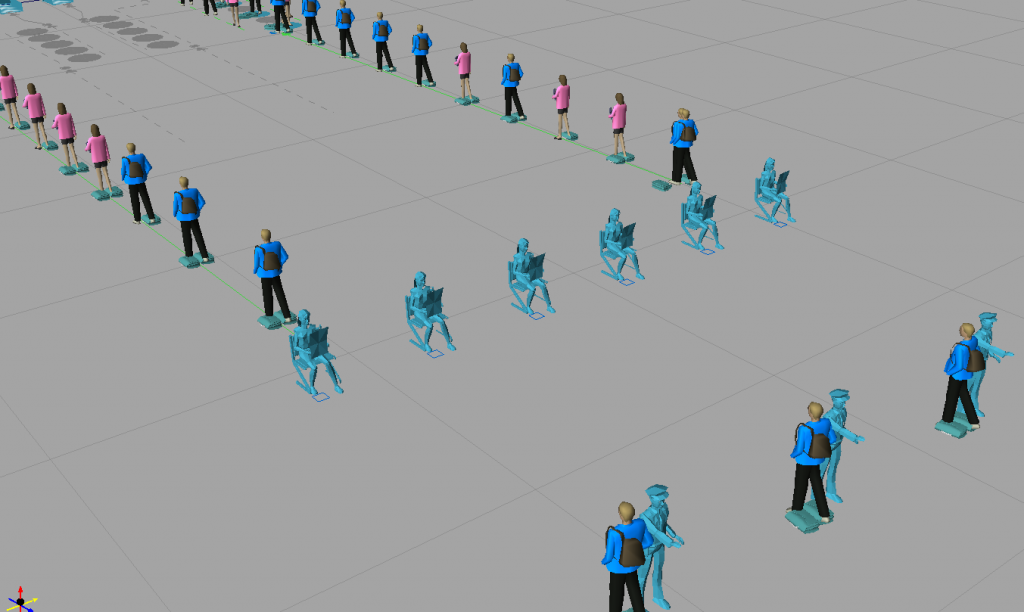 Just a quick glance to the queues length at peak hour (Figure 1) we can see the obvious reduction in passenger waiting times without (Figure 2) this restriction. Further iterations show waiting times reduction to 5 minutes and delivers a throughput of 345 passengers during peak hour, consistent with the demand from the 60% recovery scenario.

As passenger traffic recovers further toward the late-stage recovery, again new bottlenecks were identified leading to high queues and reduced throughput. At this point, it was considered necessary to open adjacent security lines. Social distancing was applied within the lane through the use of only alternate divest positions. As a result, passenger waiting times are largely reduced to almost no waiting time thus throughput shows an increase to 421 passengers’ hourly average throughput. 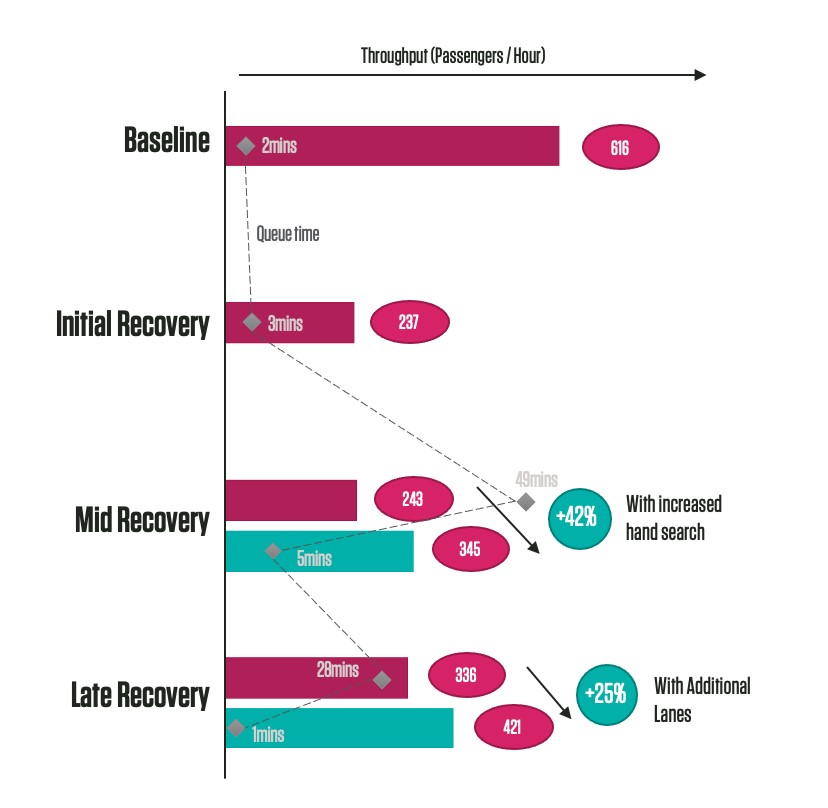 When it comes to post-COVID-19 terminal adaptation, which are the key aspects airports need to be mindful of?

Firstly, it is important to note that the passenger levels really have an influence on the ability of the process to adopt a full suite of COVID-19 precautionary measures. This is particularly important for smaller airports who may have less space to work with during the recovery. However, starting operations from such a globally low baseline of passenger traffic means that airports can afford to match the scope of the measures applied to passenger confidence. Initially with lower passenger confidence it is a great advantage that even applying the most restrictive measures can be achieved with relatively low waiting times. Measures that would otherwise be considered burdensome such as reducing the hand search to the strict minimum can be provided. Social distancing, testing, alternative processes to tactile devices and the provision of disinfection products to both passengers and staff can be applied during the initial stages of the recovery.

As traffic builds, along with passenger confidence we can consider relaxing some of the most constraining measures. We found that the need to minimise hand searches was a major driver of queue times. We need to keep in mind that one of the ACI guideline document’s objectives is avoiding queues as much as we can thus other alternatives in order to reduce the hand search to the strict minimum should be considered by airports. Those airports already implementing CT security scanners could consider focussing recovery activities around those lines. The higher quality scanning enabled by that technology could negate much of the need for hand baggage searches when compared with existing baggage X-ray scanners.  In addition, there will be no necessity for passengers to divest, thus no passengers stopping and no risks from touching potentially contaminated surfaces (tray, belt, etc).

At latter points of the recovery, passenger levels will be high at times hence we should be mindful about the measures adopted to maintain passenger confidence. Obviously, each airport is different but, generally, the space between the security lanes in a large airport is wider than in many smaller regional airports. This poses additional questions for regional airports, e.g. how can we open directly adjacent lines without ignoring health advice? Airports could consider applying similar protective solutions between passengers to those used to protect staff (or as amusingly proposed for aircraft). They can include panels in the terminal, measures that will not only solve the adjacent lines opening issue but will help people orientate to the queue.  Again, social distancing remains.

Our analysis has shown the complexity of some measures that airports will need to take that would not be immediately obvious without passenger flow simulations. A detailed passenger flow model that encompasses every aspect of an airport’s processes is likely to be extremely useful in the short term whilst there is significant adaptation of processes and terminal layouts to accommodate health protection. We have seen that macro throughput models cannot capture neither the space requirements at different points of the process nor the constraining elements caused by specific process variables.

Aviation has proven itself to be robust. Despite everything happening, the desire to travel is deep-rooted in people and our societies remain deeply integrated internationally. The industry will recover.

We will continue building bespoke models to further analyse how this pandemic will impact different terminal areas to help inform airports. If there are any aspects of the terminal or process you would be interested in us assessing in the future do get in touch! 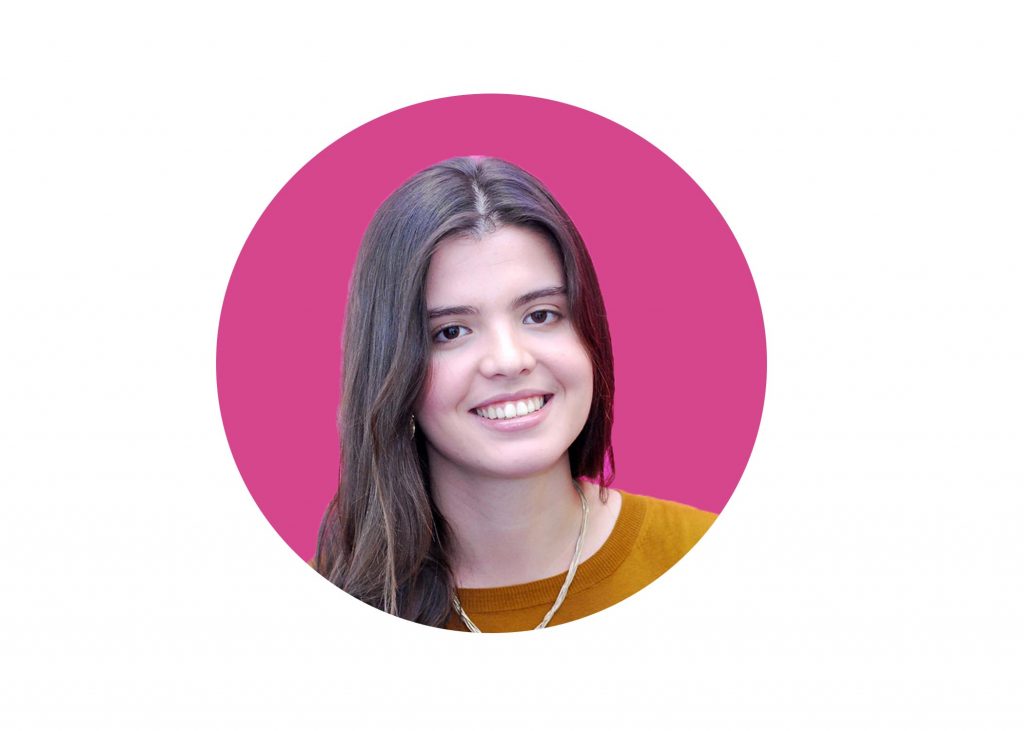