In my previous blog article, I presented a new focus for advanced approach concepts – harnessing their environmental benefits in a future very high density PBN approach airspace.  In this blog, I continue with the next step in this idea – the means of getting the aircraft in to the PBN approach airspace in the first place.

As I previously outlined, the future approach environment would consist of PBN arrival transitions to the runway.  To get to these transitions aircraft will need to be fed from multiple directions (see Figure 1). 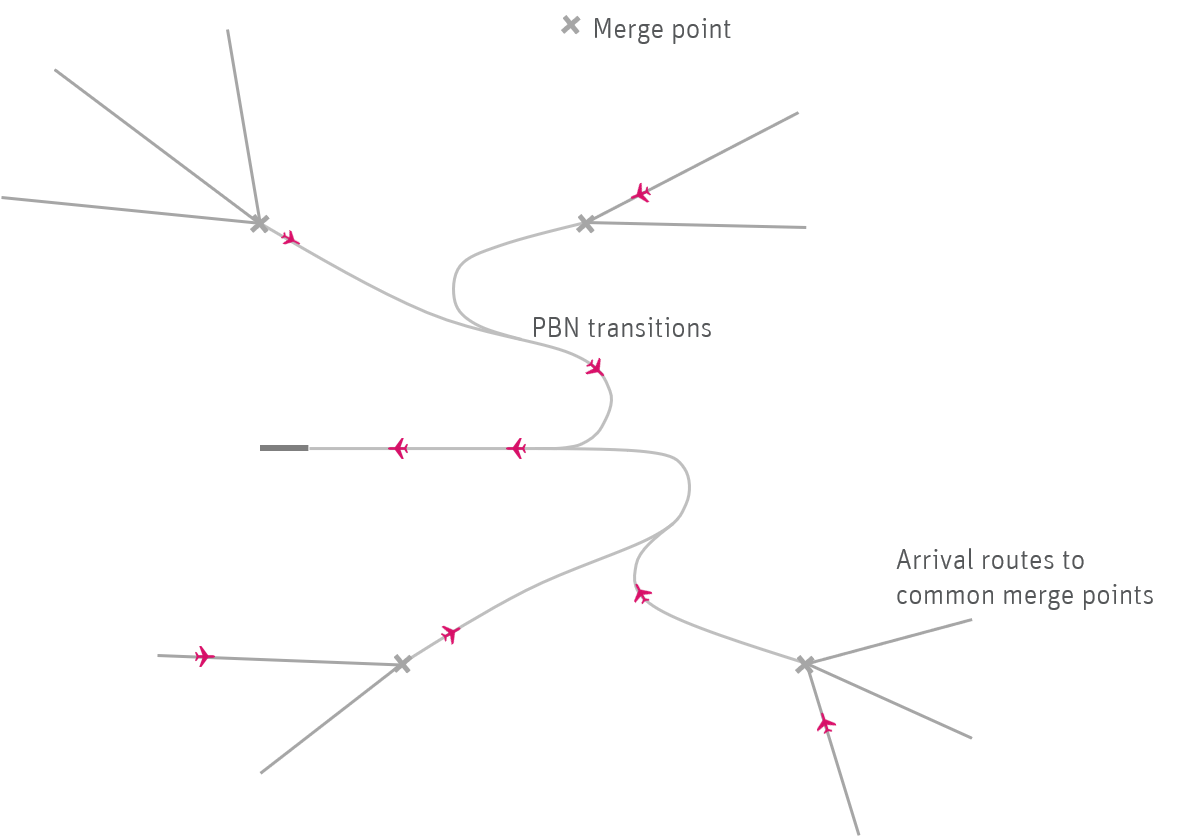 In the upstream airspace we will assume there are several routes from all directions within the TMA and En-Route airspace providing a wide range of routing options for flexibility.  These merge into the PBN arrival transitions at merge points.  To remove one variable, we will assume these merge points occur approximately 30-40NM from the airport.  There are alternative airspace options, but this assumption helps focus the discussion.

Once aircraft have been merged on to the PBN transitions the Approach Controllers will only have speed control available to them to manage spacing due to the aircraft effectively travelling on rails.  Aircraft will need to be in the correct arrival sequence.

We therefore need to consider how a future flow management solution can deliver an efficient stream of arrivals into the PBN approach airspace in the correct sequence.

As an aircraft nears its destination there is an increasing certainty in its landing time.  This goes from an approximate planned time based on a flight plan prior to departure through to the actual landing time of the aircraft.

In the current ATM operation, there is a large amount of uncertainty at the longer time horizon.  This results in a “funnel” of increasing certainty as the aircraft moves closer to the destination airport (see Figure 2). 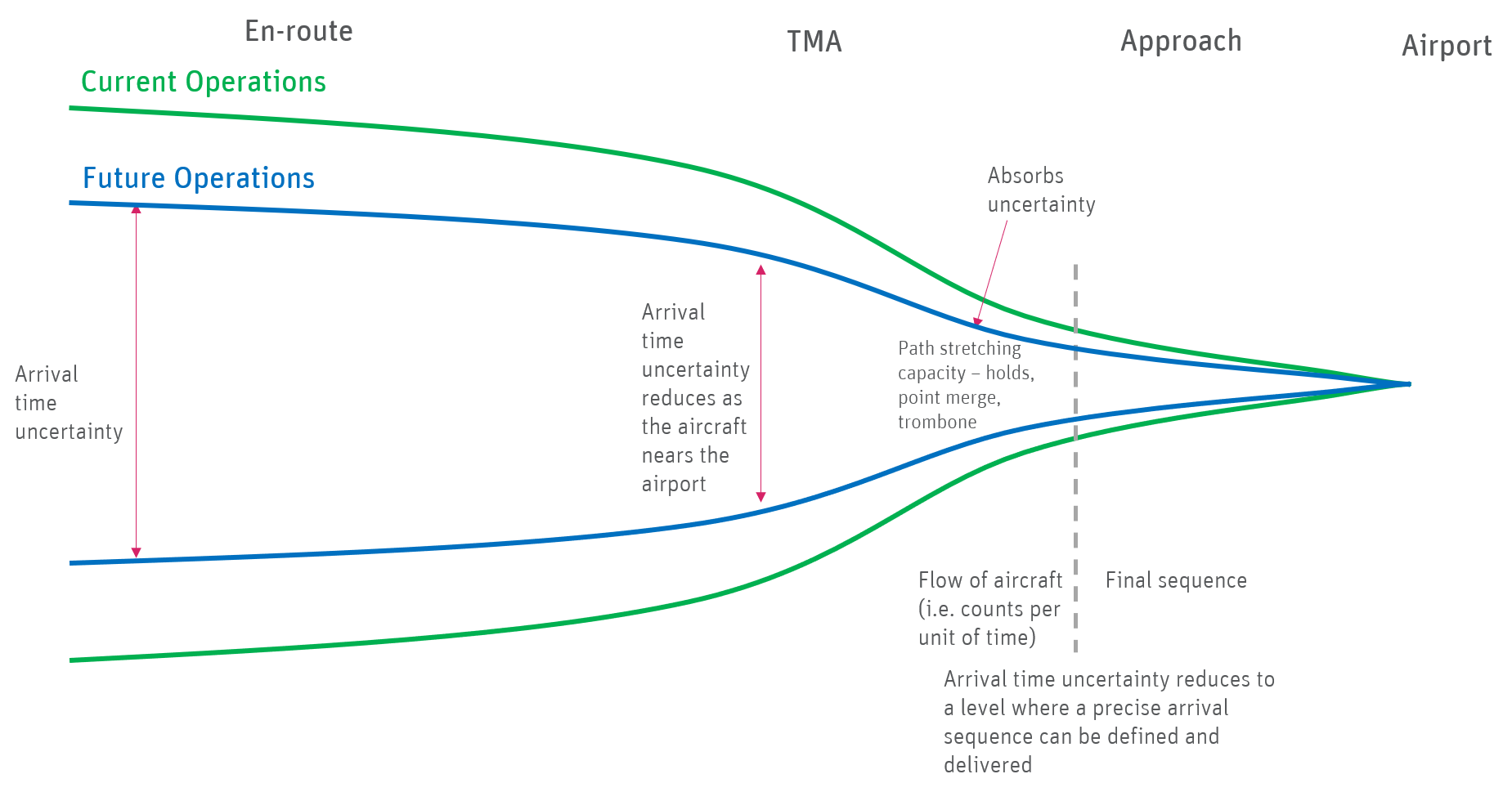 In the future operation there is a need to improve the certainty further from the airport in order to reduce the need for path stretching capacity near the airport and improve fuel efficiency.  Reducing the available path stretching capacity means that a more consistent stream of arrivals needs to be fed to the approach airspace in order to avoid unintended mismatches between capacity and demand.

Even in this future operation, there will still need to be some path stretching capacity to handle uncertainty and maximise the use of available runway capacity.  However, the goal is to minimise this as much as possible to improve fuel efficiency. 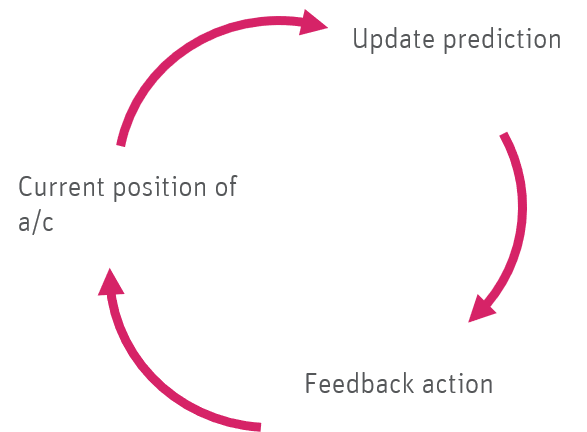 Considering the London Heathrow XMAN as an example, predicted arrival times at the stack are calculated by the AMAN based on the aircraft trajectories.  This provides the predicted stack delay per aircraft.  A message is provided to upstream sectors and adjacent ANSPs for any aircraft that exceed a stack delay threshold to enable those controllers to instruct a fixed speed reduction of the aircraft.  In this example the feedback loop involves a simple action and is applied once.

The future concept of operation will require a more finessed feedback loop in order to smooth out differences between demand and capacity of the arrival flow into the approach airspace.  Broadly this  could fit in to one of the following themes:

However, an enhanced feedback loop to modify aircraft profiles is only as good as the prediction capability that underpins it.  This means any use of an enhanced feedback loop in order to provide a precise adjustment to an aircraft arrival time should only be attempted if the prediction capability can provide reliable information.

If both the prediction and feedback loop capability can be improved, then there will be a more predictable flow of aircraft into the TMA and approach environments.

This will reduce (although not eliminate) the need for airspace to accommodate path stretching.  Although there will always be some need for path stretching capacity as no prediction will be perfect.  This is even more true in the case of high intensity operations that aim to maximise the use of available capacity hence have less room to fall back on spare capacity to make late adjustments.

The specific requirements of a flow management solution will depend on the local operational characteristics and needs.  However, we can explore the following parts of the puzzle in the context of the proposed high density PBN airspace.

Defining a concept of operation

A pragmatic solution will still rely on a flow rate being delivered to the TMA / approach airspace rather than a precise sequence but with improved matching between demand and capacity.  This would still allow for a reduced amount of airspace available for absorbing any remaining uncertainty and handling contingencies such as a closed runway.  Using flow rate provides more flexibility upstream to adjust aircraft trajectories as you effectively allow aircraft to change sequence order.

The solution needs to include the feedback loop to make this possible.  The likely solution would involve minimising the number of adjustments to aircraft profiles to allow aircraft to fly a preferred trajectory.  This would ideally be a single adjustment applied near the TMA / approach airspace but with a high degree of confidence to achieve the correct flow rate on to the PBN arrival transitions.

This way of thinking is starting from a position of conceding it will never be perfect and designing the concept of operation around what is most plausible while harnessing the potential of advanced prediction and feedback loop capabilities.

In order to support a feedback loop that gives a precise adjustment near the approach airspace there is a need for more advanced prediction capability than available today.  Broadly there are three factors that influence arrival time.

Point (1) is intrinsically linked to the upstream airspace and concept of operation.  PBN routes further upstream than the approach environment leads to fewer possibilities of where an aircraft will be routed hence improves predictability.

Points (2) and (3) would benefit from a combination of large historical datasets in order to understand aircraft performance in a range of conditions and the potential for accessing real time (or near real time) data from aircraft already flying to continuously update models.  Data from aircraft could be Mode S information or potentially downlinked planned trajectory information.

This is an opportunity to really push the boundaries of prediction capability and explore the art of the possible in Machine Learning.  There is large potential in this area with developments in other industries moving at an exponential rate.

Going forward I believe the area that needs the most work and ultimately determines the rest of the puzzle will be prediction capability.  This is needed in this proposed option for the future and if we choose to move the point where we define the final sequence further upstream then high-accuracy prediction capability becomes paramount. 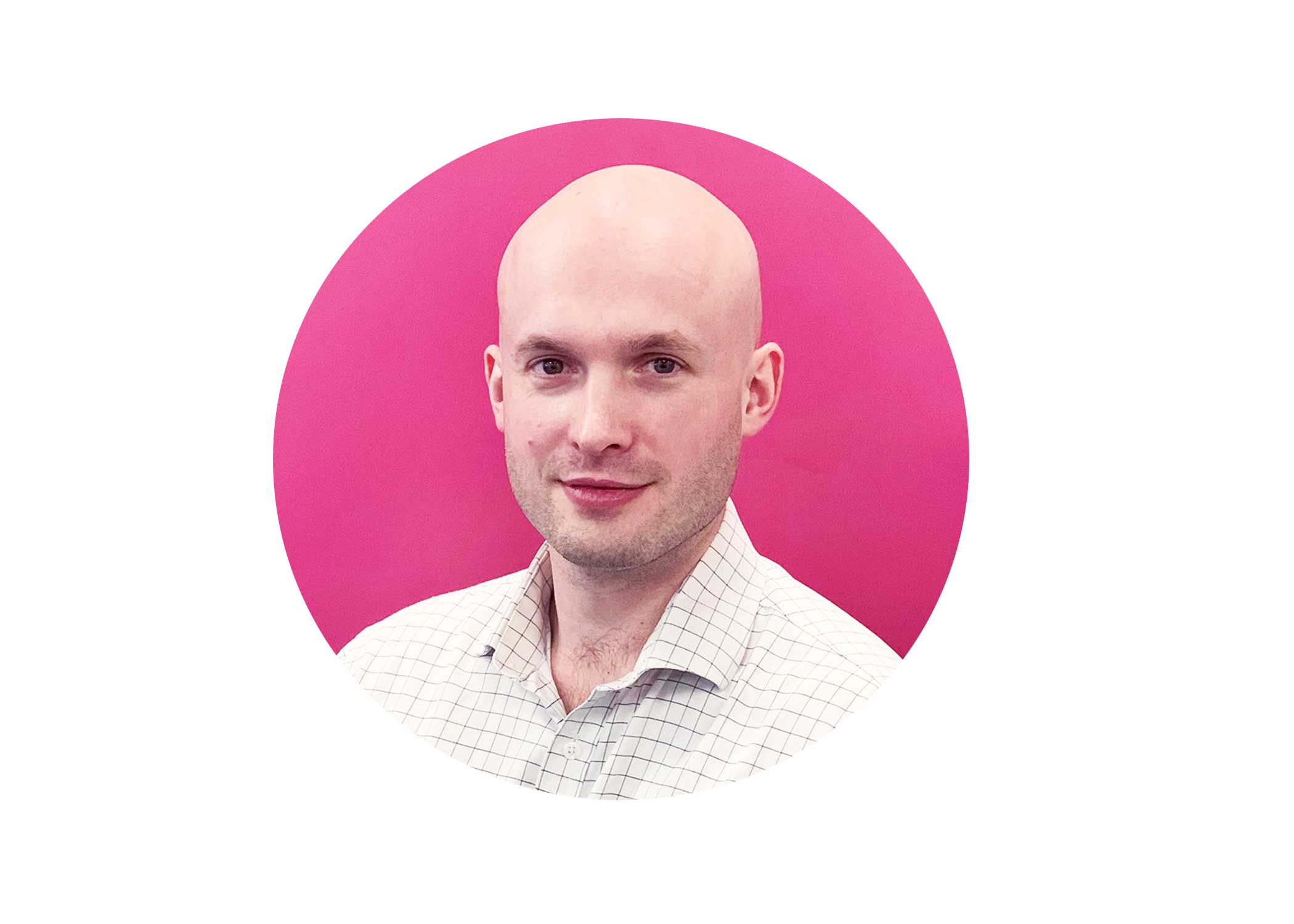