THE FUTURE OF ATM – PART 6: ACHIEVING THE TRANSITION

In the previous blogs in this series, we have explored from an operational, technical and organisational perspective what the potential Future ATM system might look like. In this part, Alexandra Vasile look at the overall benefits in Europe and how we might pay for it.

Air Traffic Management is an important enabler for air transport creating significant economic benefits. Aviation contributed $2.7 trillion to Global GDP in 2017. When ATM adds delay or prevents expansion of air transport it costs airlines a lot of money – so investing in ATM normally has a high return on investment when considered at the macro-economic level.

The EUROPEAN ATM Master Plan 2020 provides estimates suggesting that for the period up to 2050, a harmonised European ATM system could generate up to €1,800b in benefits for Europe. In anyone’s money that is a very large number and it is worth breaking down (see figure below). 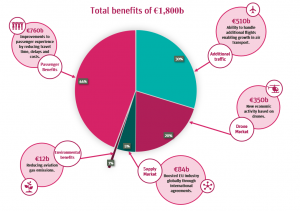 With numbers like these, it is clear that investment is worthwhile – but it also has to be clearly stated: the benefits are predicated on a new collaborative paradigm enabled by the proposed Airspace Architecture and supporting network wide optimisation. This is not business as usual; this is accelerated modernisation to deliver the most sustainable European ATM system possible.

It may come as a great surprise to many that the SES Performance Scheme is supposed to incentivise modernisation. When the Performance Scheme started in 2011, delays were manageable, but costs were deemed high – the price of ATM in Europe was double that of the USA. The early focus was on ending full cost recovery and bringing greater financial responsibility to the ANSPs. The upshot was that the economic regulation was seen as just a way of reducing costs.

Analysis of RP1 indicated that ANSP were delaying capital expenditure in order to keep costs down – modernisation was being put on hold. The true effects of this were not seen until 2018 when growth in air traffic led to significant delays – and detailed analysis showed that the worst offenders (Germany, France, Spain) had actually reduced available capacity.

Clearly, we need to think about how to incentivise the right behaviours – fiscally responsible modernisation.

It is worth having a quick look at some of the figures from the 2nd reference period of the SES Performance Scheme. As shown below, en-route ATFM delay has been well above target for every year peaking in 2018 at nearly 4 times the 0.5 min target. 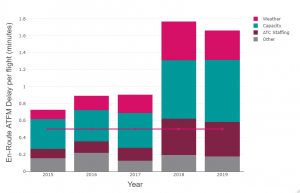 Although delays were reduced in 2019, this appears to have come with an environmental cost with the actual routes flown being longer than in 2018. Airspace Users were asked to route around congested areas to reduce delays – better for the punctuality but not what green aviation should mean. 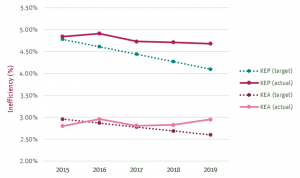 But the real thing to notice is the variation in performance. Even in 2018, over half of ANSPs met their targets; and five area control centres were responsible for nearly half of all delays. Yes, we need to invest in new capacity, but we need to invest in the right capacity. 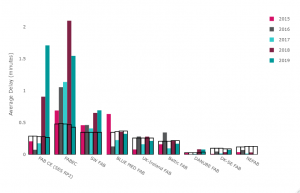 The European ATM Master plan has a stark warning – delaying modernisation by 10 years could double investment costs and reduce benefits by nearly 20%.

If we want to avoid this scenario, then it is likely that regulatory action is required to incentivise the right behaviours – and in particular the transition to virtual centres and common data layer.

The current performance scheme is not intended as prescriptive legislation – in theory ANSPs should be given the freedom to select the technology, concepts and contractual models to meet the targets. In practice however, prescriptive regulation – be it the Datalink Implementing Rule or the Pilot Common Project, has sat alongside the performance scheme reducing ANSP freedom.

To achieve the future architecture, it is necessary to ensure all regulations support the transition. The AAS itself included suggestions to:

The regulatory framework needs to evolve to support these recommendations. The current performance scheme has already been found wanting and it really isn’t fit for purpose if ANSPs are going to be genuine service providers rather capital asset managers.

The EU also needs to reflect on where consolidation (through target setting) or competition will best drive the required outcomes. As discussed previously, consolidated ADSPs ensuring provision of the common data layer could in the long run support competition for both ATS and auxiliary services leading to better outcomes than competition between ADSPs.

error: Content is protected !!
We use cookies to ensure that we give you the best experience on our website. If you continue to use this site we will assume that you are happy with it.AcceptCookie Policy