THE FUTURE OF ATM – PART 3: The Digitally Connected Airport

Aviation’s environmental challenge will severely limit ability to build new runways. The only new runway under construction in the EU is the 2nd runway at Dublin. Seventeen years after Heathrow first gained planning permission for their third runway, construction has again been delayed – this time because the UK courts agreed that the government has failed to take due account of commitments to the Paris Agreement when approving the decision. 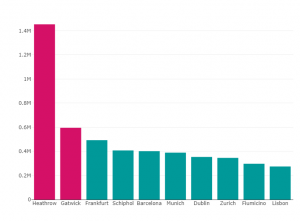 Total additional time (minutes) in the TMA in 2019

Using highly utilised runways in an environmentally responsible manner needs a new operational concept that adjusts dynamically to changing traffic patterns and takes account of all aviation assets including airline and airport constraints.

As discussed in previous blogs, the proposed future ATM system is based on a common data layer that allows ANSPs to subscribe to data services to enable the provision of en-route ATS. The same principle will also apply to airport ATS. In this blog, Paul Ravenhill, discusses how the existence of a common data layer can change the way airports manage traffic.

The digitally connected airport started with the introduction of Airport Collaborative Decision Making (A-CDM) in 1998 as a coping mechanism against significant en-route and airport capacity reductions due to adverse weather. It was in the early 2000s when the A-CDM concept started to be rapidly adopted by a number of European Airports, which led to the development of a Task Force and the need for developing common guidelines. A-CDM enhances the efficiency and resilience of airport operations by improving the air traffic predictability and optimising the use of resources. In the core of the concept is promoting transparency and collaboration between airport partners and the Network Manager along with increased data sharing in a timely manner. From a network perspective, A-CDM provides an improved view of demand en-route and, hence, improved sector planning.

By the end of 2019 – only 27 airports of 853 in Europe had fully implemented A-CDM but it is now becoming a globally recognised concept – and one being augmented by the Airport Operation Centre (APOC) concept which sees greater integration of airport processes into a single control structure leading to significant efficiency gains.

From Remote to Digital Tower

The remote tower is an idea that took hold in Sweden over 10 years ago and which now seems to be sweeping the globe. The innovation with remote tower is the use of high definition cameras to replicate and enhance the controllers “out the window” view at a location which can be remote from the airport – be that from an adjacent office or several hundred miles away.

So, remote tower is not a single concept; nor a static one. There is constant innovation – for example using digital techniques to augment the out the window display – providing better situational awareness.

We expect this trend to continue.  In an era that is digitally-driven it also makes sense that rather than replicating the visual display, tower ATC can be performed on a heads-down display of the information relevant to a future role focussed on managing the integration of the arrival and departure sequences.

It is when A-CDM/APOC and digital tower get combined with the common data layer, as illustrated below, that the focus can really change. 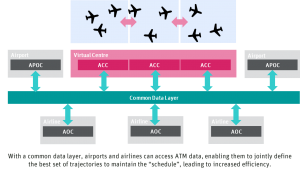 When looking to maximise runway throughput, the main issue is to control the arrival and departure sequences. Many solutions already exist – RECAT EU, Arrival Spacing Tool, Time Based Separation, Departure Manager, AMAN/DMAN integration – the right selection of which can be combined with airspace constructs such as point merge, allows operational concepts to be designed around flow management at the runway thresholds and hence optimise capacity for specific airports.

Increasingly however, the ATC role will be to enable the user preferred “gate to gate” trajectory in support of the airline and airport schedules. This implies that the ATC system is aware of and adjusts to airport and airline constraints – such as gate availability, crew flight time restrictions and passenger transfers. There are significantly less solutions in this area – with the SESAR User Defined Prioritisation Process being a notable exception.

This is not the original SESAR Concept of precise 4D clearances – the validation results are clear, to reduce fuel burn, aircraft need to be allowed to fly at the optimum altitude and speed in accordance with changing MET conditions. ATM constraints will be required and should only be applied in the final descent in order to optimise the arrival sequence.

In part 4 of this blog series, Maribel Tomás Rocha takes a deeper look at the common data layer itself.

error: Content is protected !!
We use cookies to ensure that we give you the best experience on our website. If you continue to use this site we will assume that you are happy with it.AcceptCookie Policy