Spaceflight is booming. Virgin Galactic and SpaceX have become household names in recent years with their impressive feats of engineering. Virgin Galactic are set to take tourists to the edges of space and SpaceX want to take us to Mars!  All of this though is being conducted in the USA. When are launches going to happen in the UK and more importantly how are we going to integrate them into UK air traffic management?

This is exactly what the UK government are thinking and why they have launched a public consultation on the rules governing UK spaceflight. This consultation is another step closer to the first ever launch into space from the UK, according to the UK government. Spaceport locations have already been suggested and development started, and the UK CAA will be appointed as the UK’s regulator for spaceflight. This is quite interesting from a civil airspace point of view, and is being done to remove a conflict of interest from the UK space agency on issuing both government grants and monitoring the recipients.

Commercial spaceflight incorporates all forms of space travel; whether it is space tourism, satellite launches or missions to other planets. However, when these types of operations go wrong, they can go wrong in a catastrophic and spectacular way. This has resulted, up until now, in large areas of airspace having to be shut to protect other airspace users whenever a rocket is launched. At the same time, we can’t afford to shut off large swathes of airspace for every rocket launch! We need to be cleverer than that. We need ways that protect the safety of general air traffic but which allow it to function as close to ‘business as usual’ as possible. This means that the airspace needs to be used in a more dynamic and flexible way. In addition, we need to be able to communicate quickly and effectively between all ATM partners involved.

In this blog, I explore possible ways for how the airspace can be effectively managed for all airspace users. 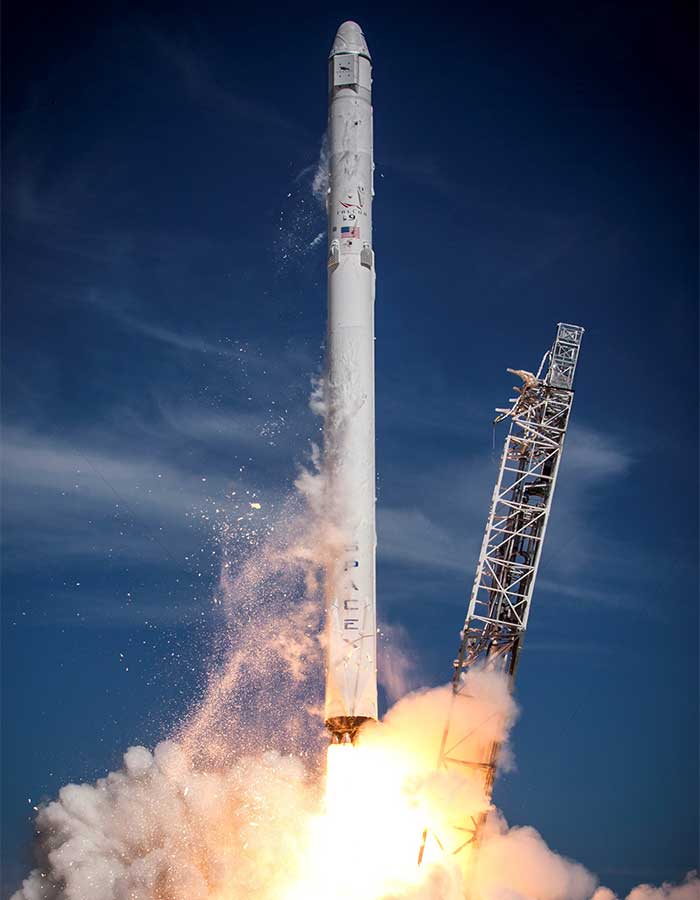 “CRS-6 Launch” by sjrankin is licensed under CC PDM 1.0

As mentioned above, Spaceports have already been suggested in the UK and are being developed for both vertical and horizontal launches.

Vertical launch vehicles are things like SpaceX’s Falcon 9 rocket. This rocket recently launched the first Crew Dragon mission to the International Space Station with Bob and Doug. They are typically used for launching large mass objects such as large satellites, missions to other planets and also for space tourism. Blue Origin are developing a vertical launch vehicle to take tourists to the edge of space.

Horizontal launch vehicles are where the spacecraft is attached to a carrier aircraft. The aircraft takes-off from a runway like any other aircraft, flies to a predetermined altitude and releases the rocket. This is how Virgin Galactic are operating their space tourism operation. By launching SpaceShipTwo from their custom built carrier vehicle. This option is also really effective for small mass launches such as CubeSats. As the rocket can be taken to a higher altitude before starting ignition, reducing the amount of fuel required to get to space and hence cost; which is vitally important for small satellite operators.

Flexible use of airspace

The current record for the largest and highest object launched into space from UK soil was a Terrier Oriole ballistic missile target that reached an altitude of 320kms during exercise Formidable Shield in 2017. This launch alone required an exclusion zone of 1,100,000 sq kms, which is approximately twice the size of Spain. Given in a more typical year, there are 2.6 million flights through UK airspace. We can’t afford disrupt these flights by closing large areas of airspace. This is exactly why we need to utilise it in a more dynamic and flexible way.

The design of airspace in the UK dates back to the 1950s and is urgently in need of modernisation in order to meet future capacity requirements whilst taking account of all the other non-commercial aircraft that utilise the sky. There are military aircraft, private pilots, leisure flyers, drones and hopefully soon – commercial spacecraft.

In the UK some sections of airspace are already managed under the Flexible Use of Airspace (FUA) concept [1]. This concept was introduced to balance the needs of commercial air transport and military aviation. The military require access to large volumes of airspace; in particular for utilisation by aircraft such as Eurofighter Typhoon or large scale exercises such as formidable shield, as mentioned above. However, giving the military segregated airspace for use whenever they want is not a sustainable approach with ever increasing demand for commercial flights. FUA tries to minimise the impact of military operations by recognising airspace as a national asset. The airspace is designed, and procedures created based on this.

For example, there are procedures in place so that the military avoid using the airspace during busy times for commercial air traffic.

This approach to the use airspace will be paramount for commercial spaceflight in the UK to be a success. Current approaches employed by the FAA to accommodate spacecraft are similar to how we used to accommodate military aircraft.

One of the operational constraints that is similar for both the military and commercial spacecraft is the weather. Spaceflights are heavily weather dependent (i.e. subject to cloud, visibility, and wind limitations). Flexible use of airspace allows reserved airspace to be handed back to commercial air traffic if the conditions are not appropriate for a launch. This approach is already utilised by the military. What is slightly different though is that the dependency on weather can also be downrange from the launch site, depending on the recovery requirements of the launch vehicle. This means you can end up with far more airspace needing to be managed than just the area around the launch site.

Advanced Flexible Use of Airspace concept

The Advanced Flexible use of Airspace (AFUA) concept has replaced the FUA concept and now integrates into the Network Manager/Collaborative Decision Making (CDM) procedures.

EUROCONTROL has set out four ways the Network Manager can improve AFUA: 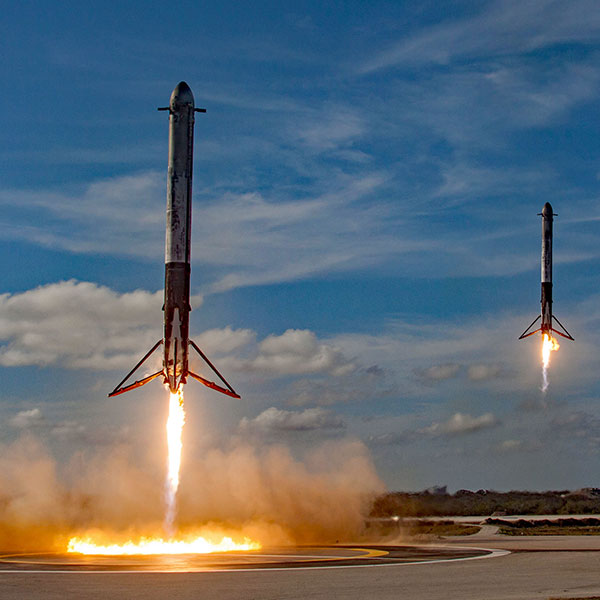 “Two Landings” by sjrankin is licensed under CC PDM 1.0

I want to focus on the last two points. The sharing of information between all ATM partners will be key to minimising the impact of spaceflight on commercial air traffic. All ATM partners need to be aware when commercial spaceflight operations will take place and there needs to be information sharing that keeps partners up-to-date on the current situation. If this is done in real time, then it could enable airspace to be reopened very quickly after a spacecraft has launched; this is where SWIM comes in as an enabler for Dynamic Mobile Areas (DMA).

There are three types of DMA, The most complex is DMA type 3 where a volume of airspace is designed around moving aircraft that require specific separation criteria based on the type of aircraft or aircraft configuration [2]. Imagine a bubble of air space around an aircraft, or spacecraft,  that moves with it to ensure separation from other airspace users. However, this requires a 4D dataset that describes the movable aircraft-centric volume of airspace. Whilst spacecraft trajectories are predictable, whether a 4D-contract (a flyable conflict-free flight plan) could be made is another question. Although having said that, SpaceX can now land their first stage rockets onto drone ships or pads so maybe anything is possible.

Where I think DMA may be more realistic though, is for horizontal space launches. This is where a rocket is launched from an aircraft. A DMA could be placed around the aircraft whilst it flies along free routes or fixed routes and then once the rocket has launched the DMA is no longer needed for the aircraft. A separate DMA could then be formed around the rocket and its possible path (nominal and failure scenarios) and could shrink to quickly free up airspace.

As mentioned above System Wide Information Management (SWIM) can be used to enable real time information sharing between ATM partners when spacecraft operations are happening.

The SWIM concept consists of standards, infrastructure and governance enabling the management of ATM related information and its exchange between qualified parties via interoperable services [3].

SWIM enables seamless information access and interchange between all providers and users of ATM information and services. In other words, it is about getting useful information to the right targets at the right time. This therefore means that future spacecraft will need to be a part of SWIM so that they can be integrated into air traffic and not just accommodated, as they are now is the U.S. [4].

Making commercial spacecraft SWIM will have the following benefits [5]:

In the future, SWIM will evolve into the common data layer of the SESAR proposed future airspace architecture. The objective of the common data layer is to ensure that current flight data for all flights can be accessed by the network manager, ANSPs, airports and airlines. The next stage to this would be to integrate spacecraft operators into the system. If they become regular users of the airspace, then it makes sense to integrate them into the airspace architecture. 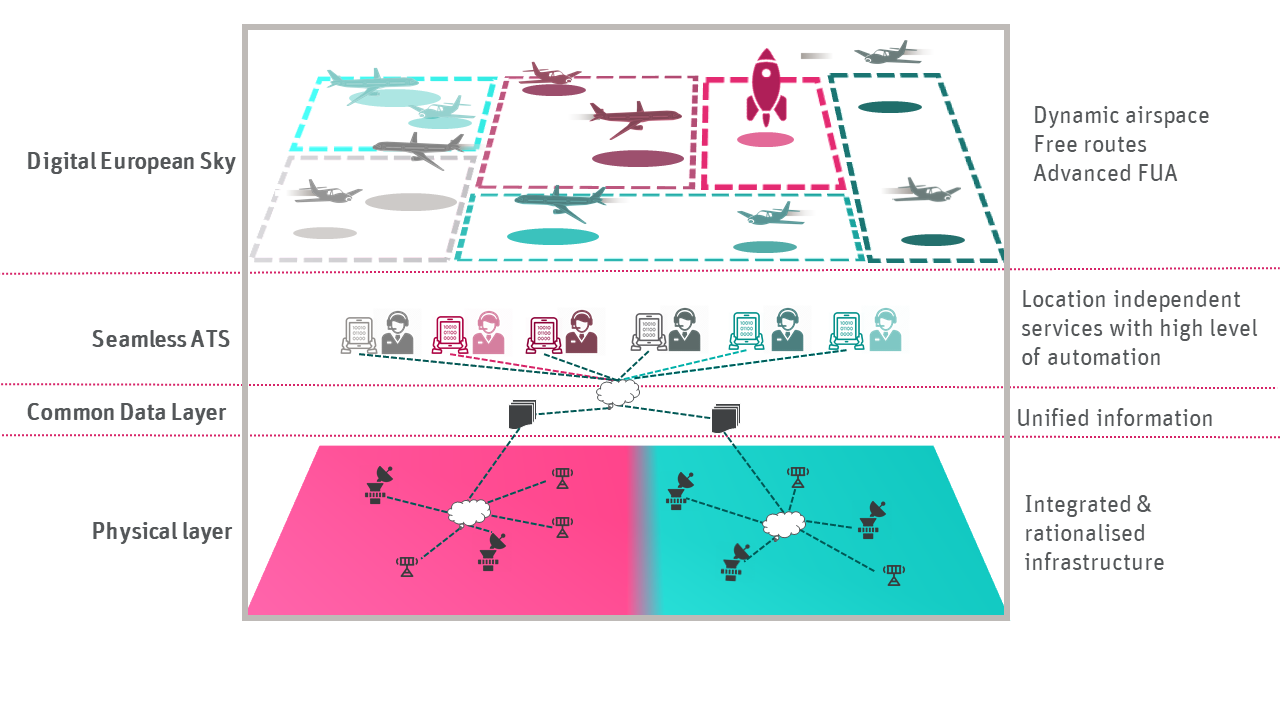 The UK is preparing for lift-off. Spaceports have already been suggested and are being developed, for both vertical and horizontal launches. To minimise the impact of spaceflight  [6], require close coordination with air traffic control and there will be a reliance on data transfer between organisations.

As the effectiveness of commercial space launches increase it will be possible to shrink the areas of airspace that are required to be closed [7]. How far could we take this though? Could commercial spaceflight be fully integrated into ATM such that it becomes as commonplace as general air traffic? 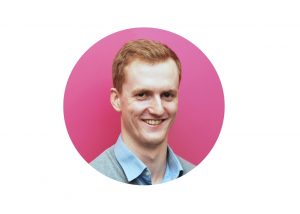 [6] ALPA, “Safet Intergration of Commerical Space Operations into the U.S. National Airpsace System and Beyond,” 2019.