There are many different aspects to consider when optimising the throughput of a runway.  A full understanding of the various constraints and improvement enablers are needed to be able to find the best solution for a specific operation.  In this resource we lay out the key constraints and how they can be optimised.

What are wake separations?

There are a range of types of wake separation scheme depending on how they are split up, how they are delivered on final approach and whether they are time or distance based.

In category schemes aircraft are split into a small number of categories.  Wake separations are defined between the applicable wake category pairings.  These separations protect the most wake susceptible follower aircraft in a category against the strongest wake generating leader in a category.

Traditionally the most common wake separation scheme is the ICAO 4 category scheme.  This categorises aircraft based on their Maximum Take Off Weight (MTOW).

The following wake separations are defined between the different categories. 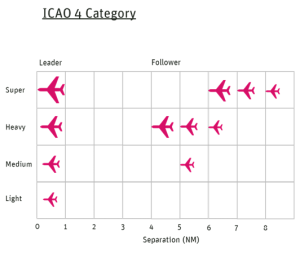 EUROCONTROL have developed a more optimal wake category scheme known as RECAT-EU.  This is a 6 category wake scheme where, in simple terms, the Medium and Heavy categories have been split up to provide higher fidelity hence a more optimised wake scheme.  This categorisation is based on aircraft MTOW and wingspan. 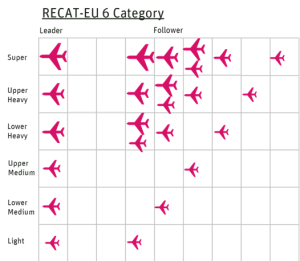 There is also an alternative scheme developed by the FAA known as RECAT-US.

In 2020 a modified ICAO separation scheme has been added to PANS-OPS that is based on a combination of RECAT-EU and RECAT-US.  The result of merging the two schemes gave 7 groupings.  This enables backwards compatibility for airports that have already implemented RECAT-EU and RECAT-US allowing those operations to be ICAO compliant with the new scheme.

The majority of wake separation schemes are delivered on final approach to the runway threshold.  This means as the leader crosses the threshold the follower must be no closer than the required separation.  This typically means additional spacing needs to be added further up the final approach to anticipate the catch up between an aircraft pair as the leader decelerates for landing.

The only exception is the UK 6 category wake scheme which is designed to be delivered at 4DME.  The wake separations in this scheme have been designed to accommodate the catch up that will occur after the leader passes 4DME.

Distance vs Time Based Separation

Traditionally wake separation schemes have been deployed as distance based schemes whereby the separation is defined as a distance regardless of wind conditions.

In a strong headwind, aircraft will fly slower over the ground while maintaining the same air speed.  If the separation is a fixed distance, then the aircraft will take longer to fly that distance resulting in reduced throughput.

The Time Based Separation (TBS) concept defines time separations rather than distance separations.  These have the goal of delivering a consistent time separation between wake constrained pairs regardless of the head wind conditions.

To date the only TBS concept in operation is at London Heathrow although further deployments are ongoing at Schiphol and Toronto.

The other key separation constraint that will be applicable between all aircraft pairs (unless visual separation is applied) is the Minimum Radar Separation (MRS).  The MRS is mitigating against mid air collision and the actual size of MRS is dependent on a range of factors including system performance and aircraft speeds.

How non wake aircraft pairs are delivered on final approach depends on the procedures of a specific operation.  For example, the use of visual separation (either between pilots or between the controller and aircraft) can allow for reduced separation.

In cases where the ICAO requirement around runway occupancy for 2.5NM cannot be met for all aircraft, there is potential to develop an optimised ROT concept that will enable the requirement to be met for certain groups of aircraft.  This is discussed further below.

Runway occupancy is a complex area to optimise due to the huge range of factors that influence how long an arrival aircraft takes to leave the runway.  The factors include aircraft type, landing weight, flap setting, runway exit design, wind conditions, runway surface conditions and more.

In segregated mode, only the arrival runway occupancy is relevant.  Using final approach tool support, it is possible to optimise the spacing on final approach considering ROT.

The implementation of an optimised wake separation scheme may result in ROT becoming the larger constraint, hence would drive the need for final approach tool support to consider the ROT.

In addition, a ROT concept could be applied between non wake aircraft pairs where ROT is the larger constraint relative to the MRS.  It could also enable support for 2.5NM MRS where the overall average ROT defined in PAN-OPS ATM cannot be met for the full fleet.

In a mixed mode operation, spacing on final approach needs to accommodate both the arrival and departure runway occupancies.  Typically, the spacing is set up as a single distance based on the current wind conditions (i.e. stronger headwinds mean the distance can reduce).  However, without final approach tool support it is difficult to optimise for ROT to a higher level of fidelity.

If final approach tool support is being used, then the optimisation potential of ROT greatly increases.  ROT can be factored into a tool at either the wake category or aircraft type level.  The knowledge of the departure aircraft increases optimisation even further.

In Approach operations there are a range of factors that impact a controllers ability to deliver the required separation or spacing on final approach including MET conditions, speed compliance, aircraft types and operators to name a few.  Without tool support controllers are relying on their experience to take these factors in to account.

Final approach tool support where an indicator is presented to the controller can provide more accurate delivery accuracy and gives significant opportunities to improve runway throughput including: