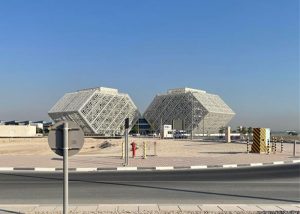 Think Research is pleased to announce the formation of a wholly owned subsidiary company and the opening of a new base in Qatar.  The new base was formally opened on 24th October 2021, coinciding with World ATM Congress in Madrid with keys to the permanent office received on 15th December 2021 .  With new offices in the Qatar Free Zone, four staff from the UK have already relocated to Doha and taken up employment with the new company, Think Research QFZ LLC (“Think QFZ”), as they work on our expanding project work in the region.

“Despite the market uncertainties in the last 18 months, we have constantly tried to take a different approach.  We decided early on to stick by our team and invest in growth, rather than shrink into a crisis.  We are now seeing that approach pay dividends with recent contract wins around the globe, the new company and office in the Middle East, being selected as finalists in the Investors in People Awards and accreditation in the UK’s “Good Business Charter”.  Our messaging throughout the COVID crisis has been one of positivity and belief that things will get better.  And so it gives us great satisfaction to see that positivity being reflected in new growth for the company.”

Co-founder of Think Research, Rob Waggitt will head up Think QFZ having relocated to Doha earlier this year. 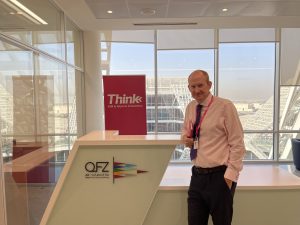 “We actually have a long association with the Middle East.  We first worked on the “New Doha International Airport” – now named Hamad International Airport – 10 years ago.  In fact my wife and I lived in Doha for a short while soon after we got married!  In that 10 years we have had the privilege of working for several clients across the Middle East and this new base is a natural progression of that growth.”