When the market talks Digital Towers, it usually focuses on operational benefits or technological advancements, and not so much on the human performance and human factors. Yet we at Think have long acknowledged that this is a significant aspect of the concept, especially in such a human-centric environment as Air Traffic Control (ATC).

Human Performance in Digital Towers overlaps with another human factors issue we have been researching – mode switching – and in this article we will look at some scenarios where Air Traffic Controllers (ATCOs) may experience mode switching, and we will propose potential solutions and actions for minimising the risk and impact.

But first… What is Mode Switching?

‘Mode switching’ is sometimes referred to as risk of mode confusion.  This can occur when the users (controllers in our case) switch between similar system modes that have different capabilities (e.g. levels of automation or support).  This can lead to confusion caused by the usage of multiple mental models when performing the same task.

Mental models describe how we relate to the world around us (including the systems we use) and play an important role in Human-Computer Interaction (HCI) and Human Machine Interface (HMI) design.  They are frameworks for thinking and help us simplify complex things so that our brains can reason through them. They are based on beliefs rather than facts; can be quite personal; include assumptions and simplifications; and yet we use them to make often critical decisions.  When switching between tasks or systems, we switch between these representations of the world and the systems we are using and as a result, there is a risk that we accidentally use the wrong mental model or bring in elements from other models without realising.  The longer we have used a model, the harder it can be to switch from when a new element enters our system.  Have you ever moved house and, after a long day at work, found yourself accidentally heading towards your old house?  Whilst that might merely have been a temporary inconvenience, similar confusion can have more disastrous consequences.

In the context of air traffic, we refer to two types of mode switching: 1) change-related and  2) in-service.

Now that we know what Mode Switching is, how do we know that it is a real risk in ATM and how do we deal with it?

How transitioning to new environments can be challenging

Over the years, there have been numerous aviation incidents and accidents caused by human performance variability as a result of a change in the environment.  At a general level these are often referred to as the classic “human error” but could also be attributed to “mode switching”.  We looked into some examples to better grasp the impact on human performance.

Mode switching for pilots is already recognised as a high-risk factor and was found to be a causal factor in a number of accidents.  A good example is the Asiana Flight 214 [1] which crashed into a sea wall just short of the runway threshold.  The aircraft was flying at a very low altitude and at a dangerously reduced speed at the time of impact.  The investigation found that the crew made an assumption that auto-throttle had been enabled when it was actually in “hold” mode, thereby not supporting speed control.  In-service mode switching occurred as a consequence of crew over relying on automation support which was not available.  Further contribution to the confusion was also introduced by change-related mode switching as the captain had insufficient experience on the aircraft type.  The combination of these factors made recovery impossible, resulting in a tragic outcome.

In ATC however, mode switching was not so commonly considered, at least until recent years where digitalisation came into play.  Human performance variability in ATC caused by mode switching is now acknowledged by ANSPs when a new system, technology or operational procedure is being implemented and real-life examples of mode switching ATCO errors have been discussed [2].  Of the examples given, one is a classic example of a change-related mode switching error where a controller executed an incorrect procedure during live operations.  This happened as a result of the controller testing a new procedure in the simulator, then returning to live operations and executing the tested procedure instead of the correct procedure.  Another example given by the service provider is an example of in-service mode switching error.  This followed the introduction of a new system onto an existing technology which also used the same hardware.  The similarity in technology and hardware caused the controller to reference the wrong mental model, with the result that performing an action led to an unexpected outcome.

As you can see, the severity of mode switching varies significantly in different situations as a result of numerous contributing variables – environment, experience, available tools, recovery options, etc. However, it is an important factor to be assessed to minimise any risk of errors that could lead to fatal disruptions.

When we talk about the Digital Tower technology, there are some mode switching related considerations for ANSPs that are essential to be recognised.  As we discovered earlier, there are two ways in which mode switching occurs – one is change-related mode switching that refers to the  transition to new systems or tools and the second one referring to a change between systems/roles known as in-service mode switching.

Let’s consider an ATCO that is currently being trained on a Digital Tower technology.  The controller practices getting familiar with the system for a set period of time either daily or several times a week, while the rest of their shift is spent in live operations at a conventional tower.  This is a cost-efficient solution for conducting training, especially for resource-constrained ANSPs.  However, as evidenced by the article referenced above,  it can also be a potential safety hazard and preposition for error if controllers are to use the wrong mental model in a situation that can have real-life consequences (e.g. during live operations).  Below we have identified three scenarios along with mitigation actions where mode switching can be a potential risk for Digital Towers: 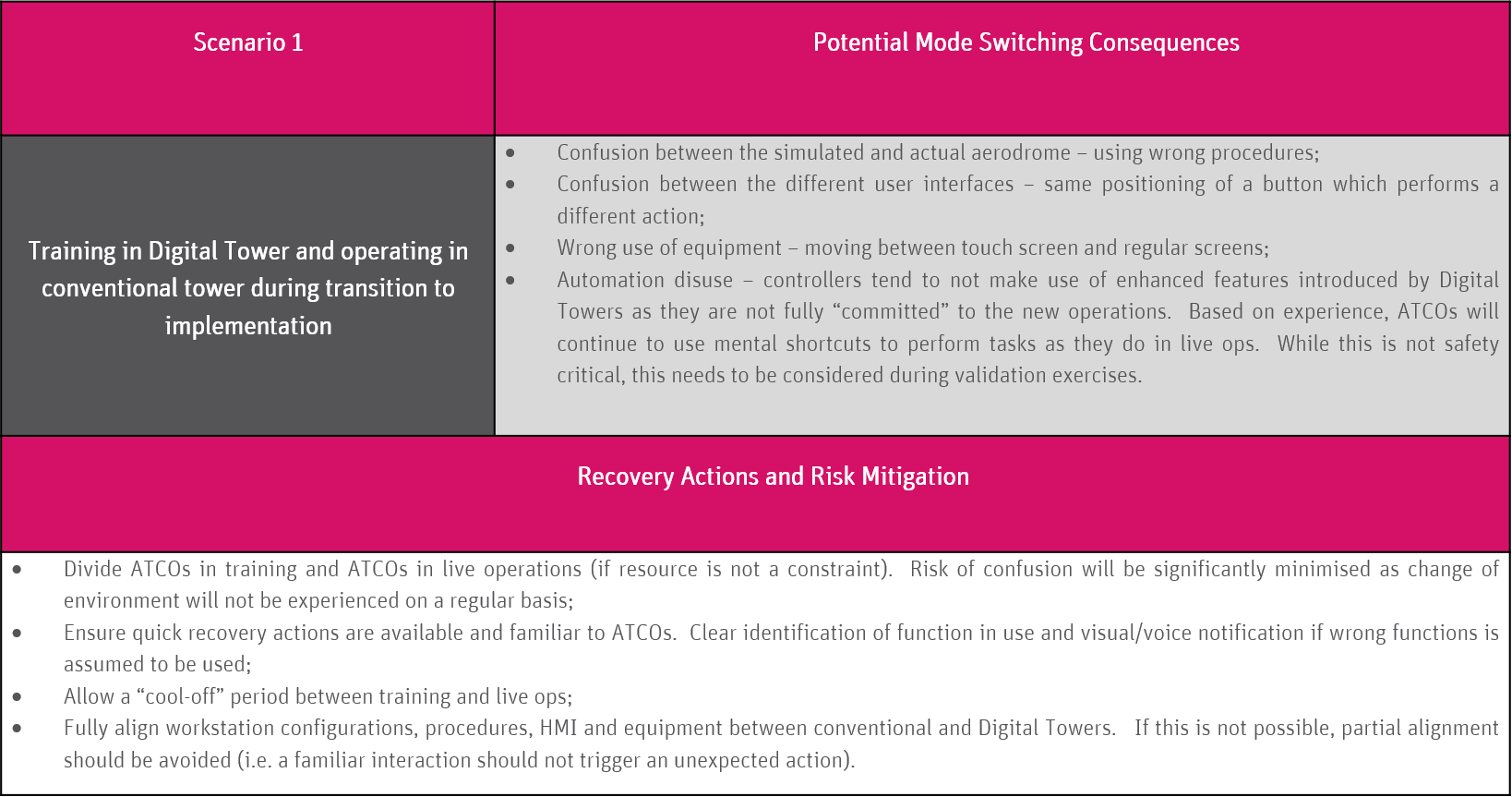 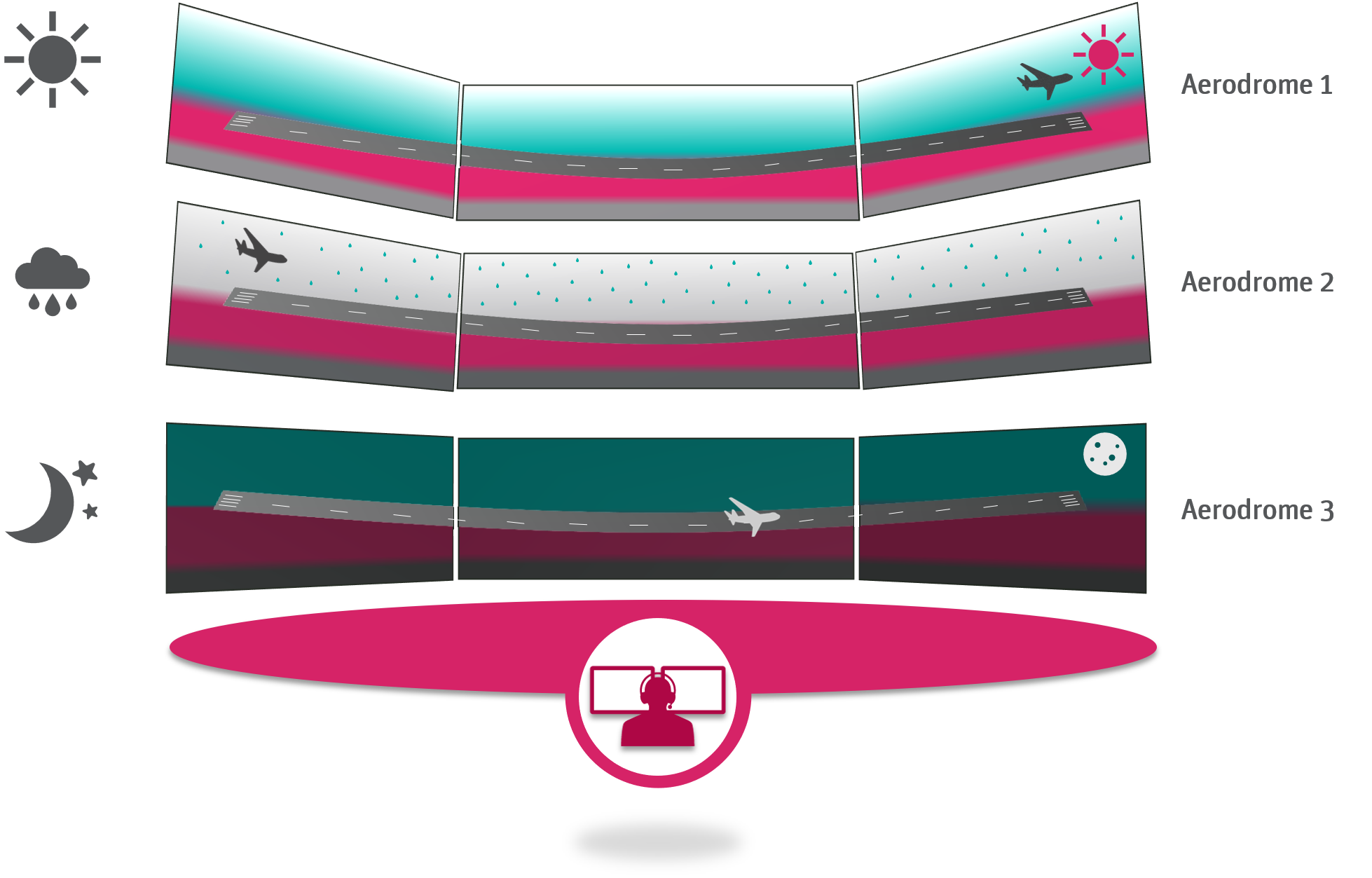 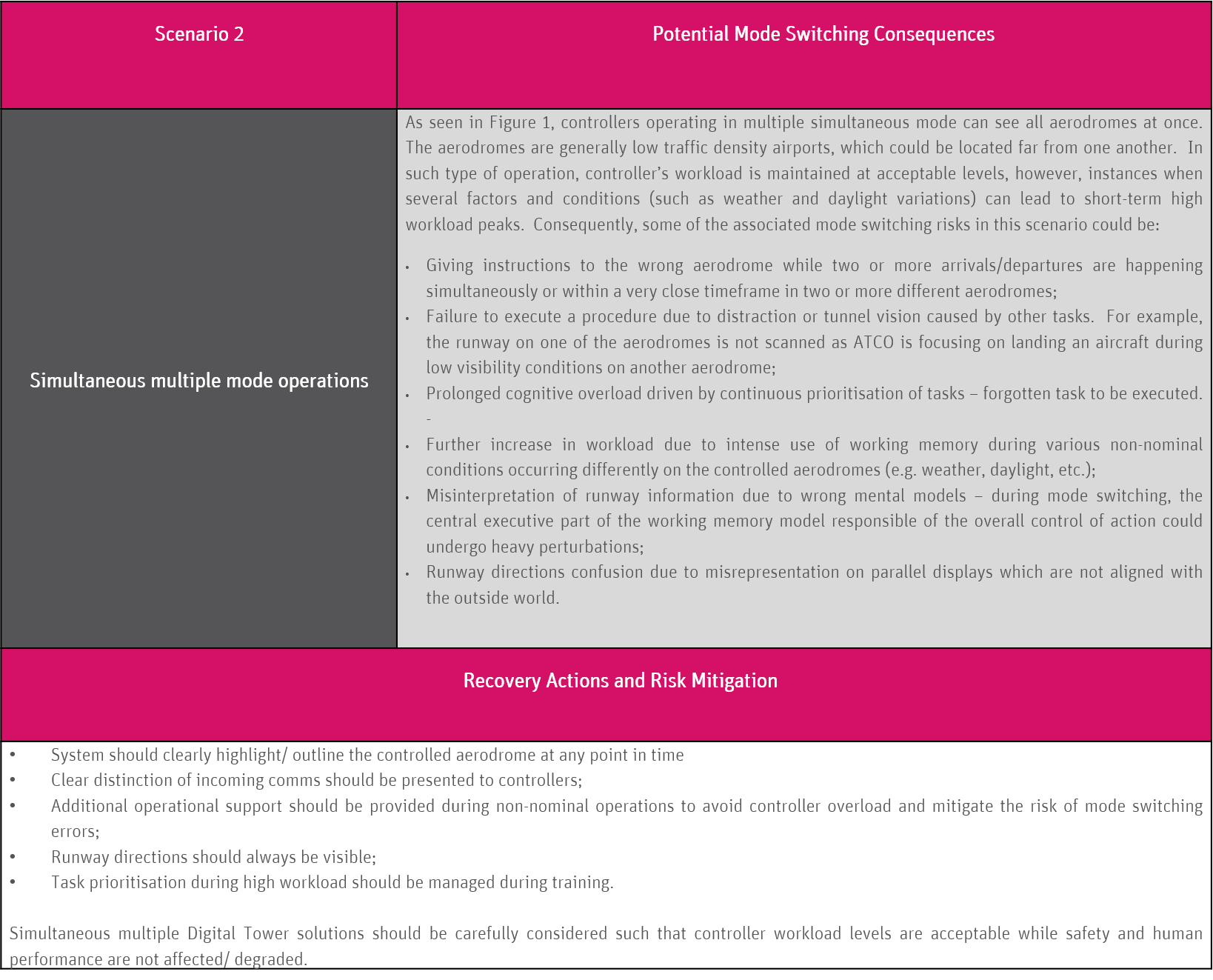 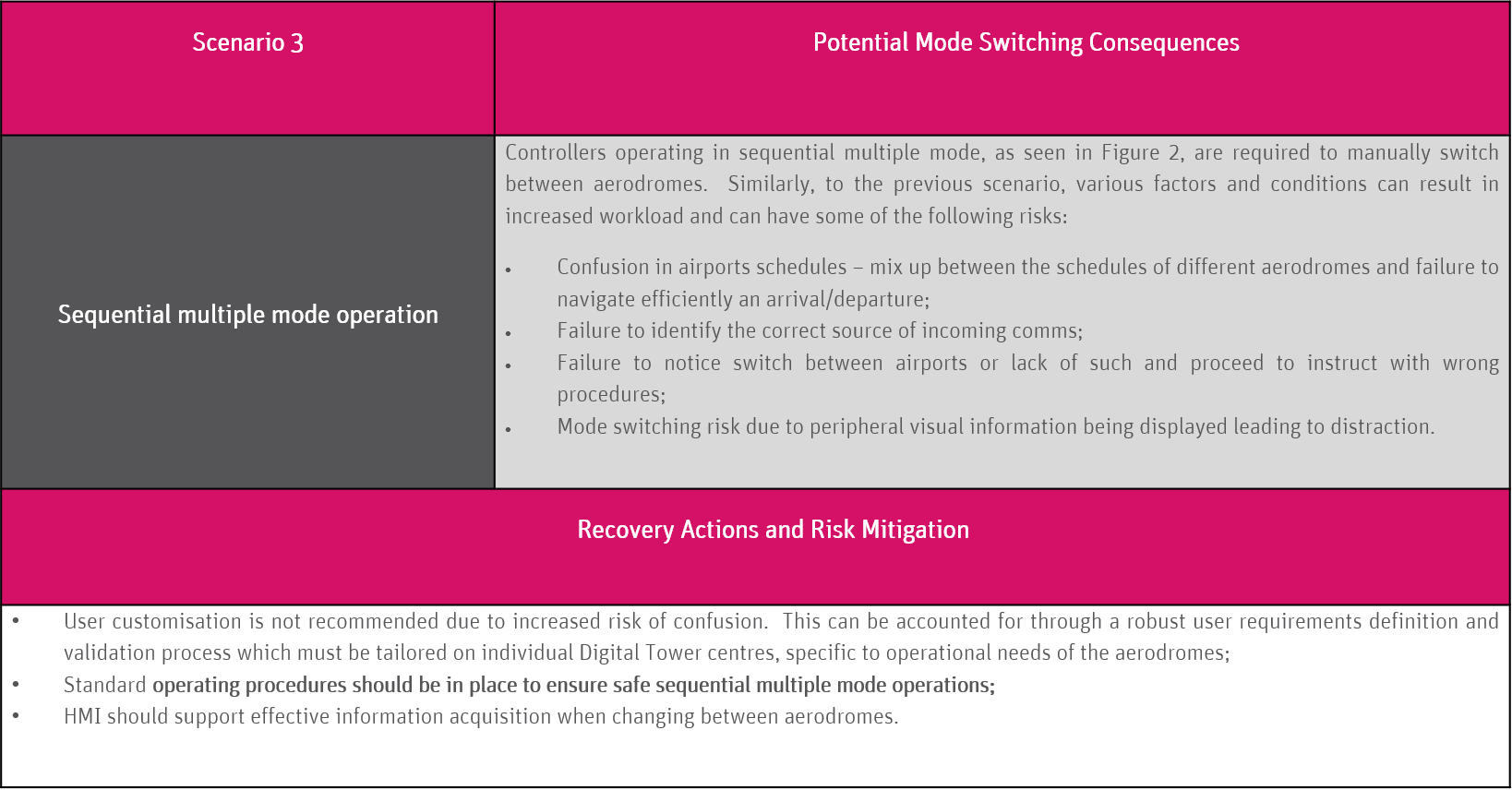 How do we prevent mode switching issues?

It is important for ANSPs to consider mode switching as an important factor to be assessed and managed throughout the implementation cycle and operating life of Digital Towers.  While in the previous section we identified three scenarios where mode switching could happen and have an impact on operational performance, below we have listed potential general solutions and measures that could be undertaken to prevent or minimise the change of the such occurrence:

We are about to enter a phase where more and more Digital Tower transitions take place.  Consequently, we expect to manage more change-related mode switching through the development, training, and transition.  Then, as multiple-mode Digital Towers are being implemented and become operational, more in-service mode switching will need to be carefully assessed and addressed.

Mode switching will become even more significant as it will be less of a theoretical construct.  Up until now when considering Human Factors and Human Performance in Digital Towers we have been kept busy with ergonomics, user acceptance of new HMIs, workload and situational awareness.  We think that these factors have been carefully considered, especially through the concept design phase, and we now have the time and experience to look at the next level down at issues like mode switching.

We appreciate this may be a rather specific aspect and you might not be very familiar with it but that’s exactly why we are here!  We like to keep you in front of the curve by raising critical questions before it’s too late while also trying to answer them for you!  Hopefully this blog has given you a new way to think about it and put names to the things we are talking about. 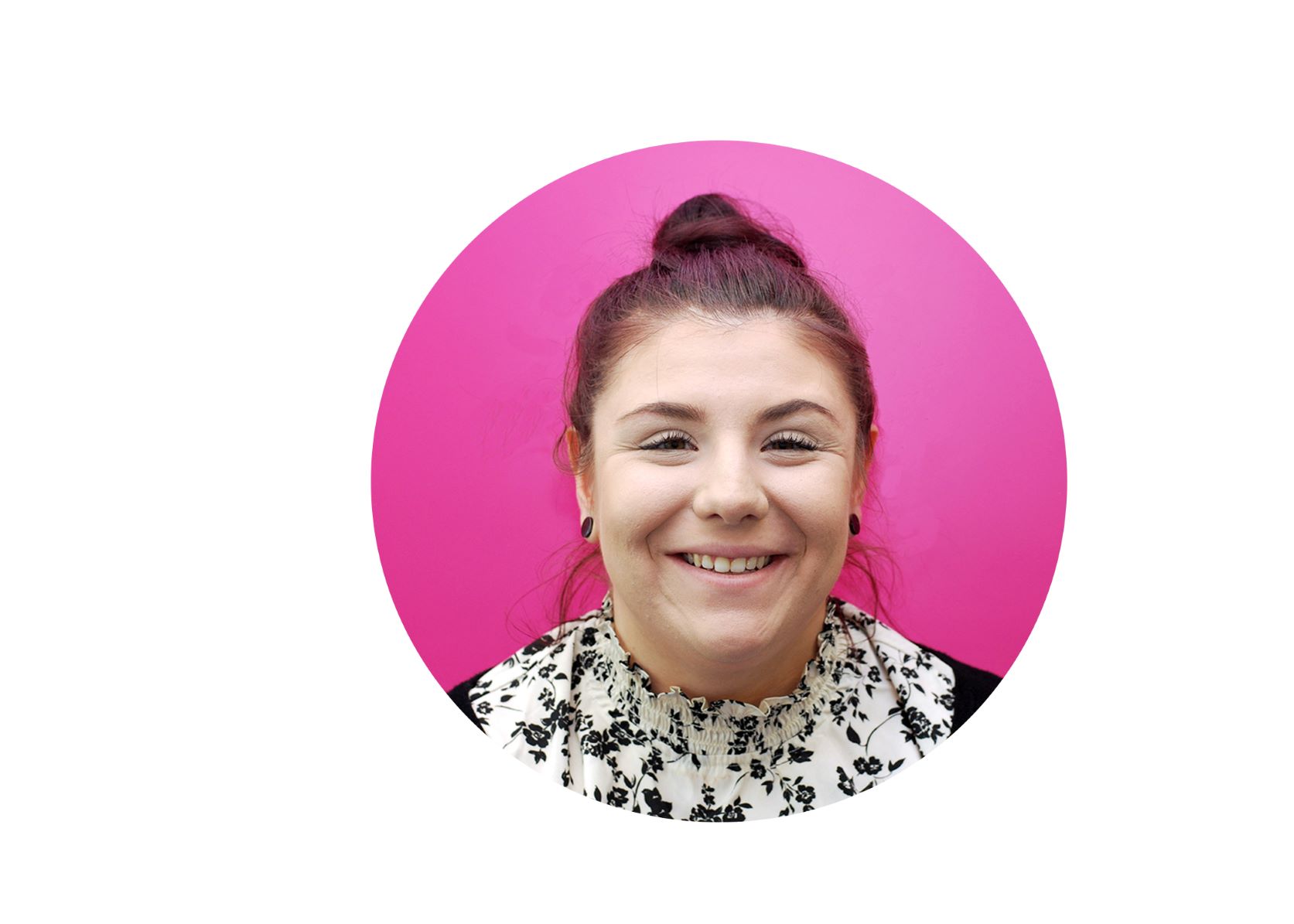